Home Enlivening Uranus in Taurus, Taking The Bull By The Horns

Uranus in Taurus, Taking The Bull By The Horns

Uranus in Taurus, Taking The Bull By The Horns 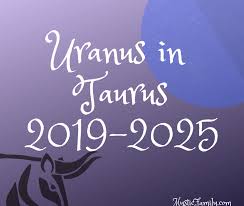 The last time the planet of Uranus was in the zodiac sign of Taurus was in 1934, so very likely you are experiencing this energy for the first time.

The Planet Uranus was the first to be discovered by a telescope, it can’t be seen without one so we didn’t know it existed until the year 1781.

Uranus fittingly is viewed as the unseen and hidden aspects of our life.

In mythology the folklore will tell tales and stories which emphasize the fables and legends of a tradition, this is the case with Uranus because of its mystical and powerful energies.

Uranus is known as the Father of the sky who bore a child with Gaia (she was the mate of Uranus, the Mother Goddess), the child they birthed together was Mother Earth.

Uranus represents our internal Hippy, it’s energy allows us to fly our freak flags and insists we do things in our own unique way.

As a cold and icy gas giant, the planet Uranus is unfriendly, frosty and frigid, as it is known as the planet of rebellion.

Every seven years Uranus gets itchy as it looks forward to its circle around the sun into another zodiac sign.

This year and in this month of March 2019 Uranus has moved into the Zodiac sign of Taurus, the question is, ‘should we be afraid’?

The last time Uranus was in Taurus was in the middle of the Great Depression, We were also on the brink of World War 11.

At the same time, it was during Uranus in Taurus that Roosevelt implemented the Social Security Act, which mandated that we as a society take care of those in need who existed outside of the capitalist-worker system (the elderly, the very young, and the differently abled).

Rejecting fear is how we are to manage this potent time in the sky, we can turn our fears into triumph rather than viewing what happens to us as a tragedy.

Taurus is the planet of awakening the rebel, over the next 7-8 years we will see a tremendous change in how we feel about our material and financial well being.

Taurus wants security and Uranus wants freedom, can you see how this is energy is going affect us humans? The big question to ask yourself is do you own your values? Do you appreciate the Earth, art, food, sensuality, and your material possessions?

Uranus is known to bring sudden events, and so at the end of this cycle when we get a chance to look back, we might be shocked at all of the adaptations that were made, not only in our own life but in the life of our species.

Uranus wants freedom, out with the old and not so much new (materially speaking) is the motto now. As Uranus enjoys its stay in Taurus the vibe of art will be going strong. Be inspired to take up the paintbrush, the potters wheel, the camera, the guitar, gardening and any other medium that allows your creative juices to flow through you.

Taurus deals with getting in touch with your body, especially the neck which is the Throat Chakra, your ability to speak your truth with no feelings of guilt, or any self-punishment.

As the Earth changes, the weather patterns continue to change as our planet adapts to warmer oceans and temperatures.

In conclusion, Uranus in Taurus is a time to liberate oneself from the burden of ownership, much of it from a soul perspective. In other words, release yourself from other peoples opinions of you, you never needed to own this, to begin with.

Uranus is in the sign of the Bull, and the stubborn bull desires financial freedom, it wants to plant roots in what is secure, especially property and home, so this may be the case for you.

Perhaps you are settling down for the first time in a long time, maybe you will uproot to a new location, sell and buy a home and property in another town, or perhaps you will be paying off a mortgage.

In any case, our financial assets, our material worth and what we own will be adjusted if there are karmic lessons to be learned. Uranus rules our higher minds, and radical developments happen when it is in town, for better or for worse.

The sign of Aquarius governs Uranus, so science and invention, liberation, rebellion, eccentricity, and life force energy are all up for grabs in a Taurus-y sort of way for the future of the next 7 years.

Uranus loves Monday, fitting as it is the first day of a new week, the beginning of new adventures, new routines, new ideas and new ways of making money.

Enjoy the ride the Planets are providing for us, hang on tight, let your freak flag fly and let go of any inhibitions and certainly don’t cling to fear, take leaps of faith and see where life leads you in a healthy and wealthily sort of way.